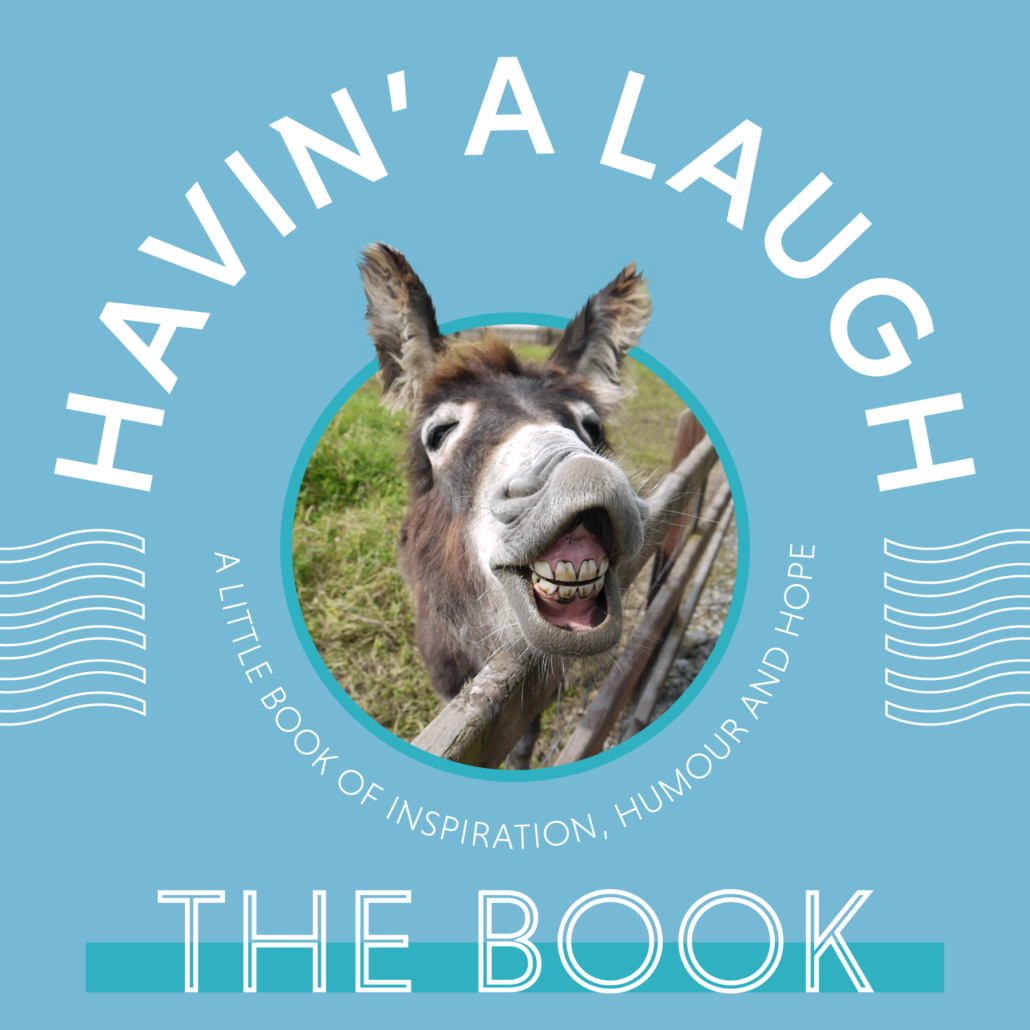 Thank you so much to everyone involved in making Havin’ a Laugh The Book. It’s now on the way to the printers and we’re very excited.

Havin’ a Laugh The Book is a feast for the eyes filled with great stories, illustrations, art and poems for you to enjoy. It would also make a great Christmas present for friends and family. 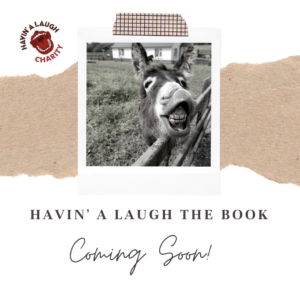 We are so amazed by the volume of submissions and the personal stories shared. Thank you all so much.

We’re now going through the selection process and getting ready to go to print.
So excited for this next phase, stay tuned for Launch Date coming soon. 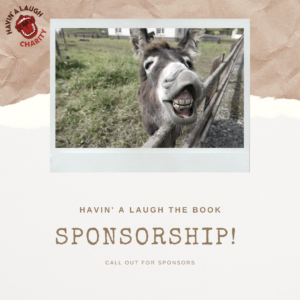 Our book is now with the printers! Thank you so much to everyone who sponsored Havin’ a Laugh The Book.

The book will include three different & inspiring themes

Check out some of the great stories we’ve received below: 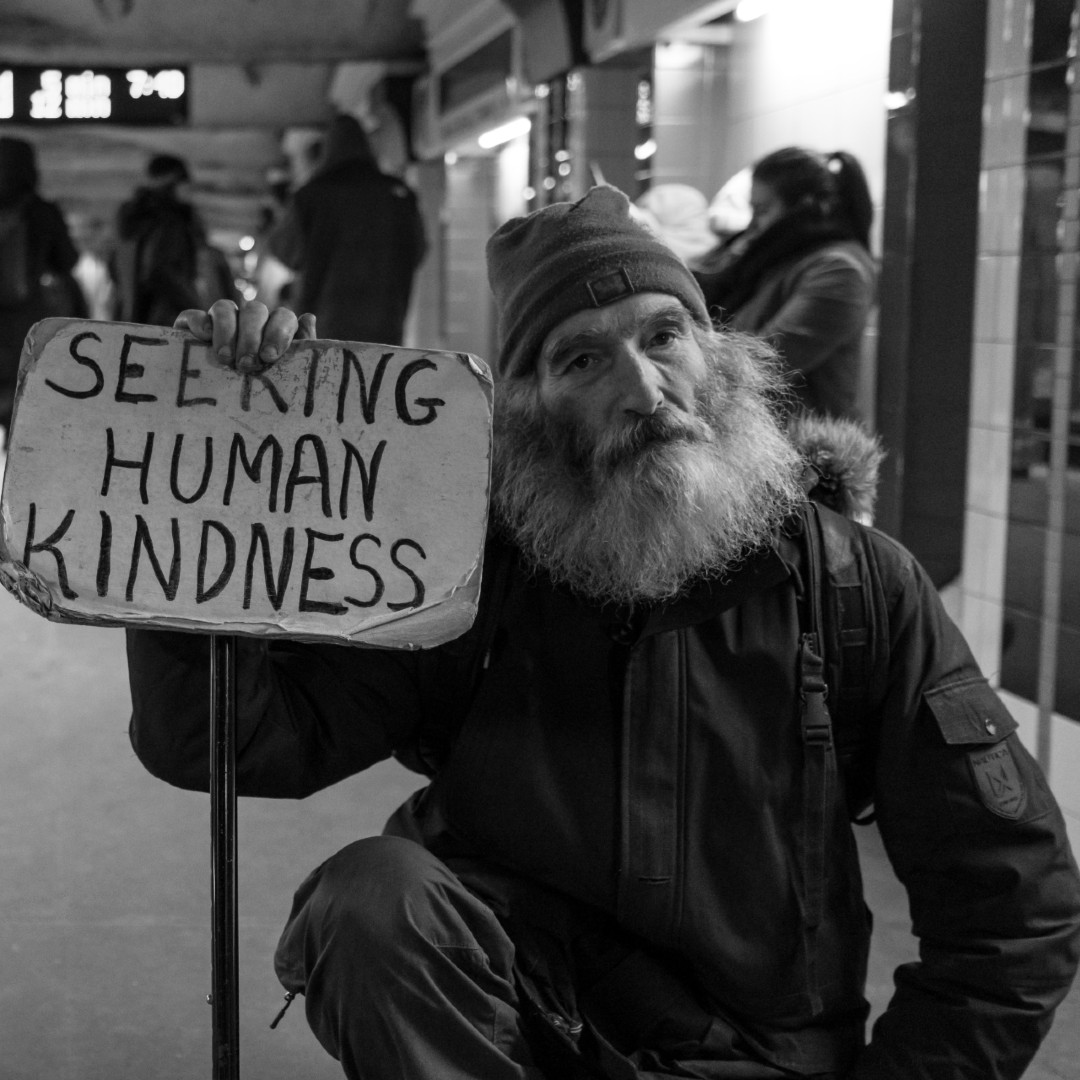 I had been struggling on my own with guilt and anxiety for years. I decided to go to a community mental health meeting. I started to cry during a music therapy session when the therapist played ‘Let it Be’.

For the first time in years, I just let the tears flow.
A woman next to me reached across from her chair and gently held my hand. It touched me so deeply to think that although she was battling her own demons, she had enough compassion and empathy left somewhere inside to reach out and try to support me.

That simple act of kindness allowed me to start on the road to self-forgiveness and healing. Mental illness does not define a person. Somewhere behind the illness is a worthy human being. 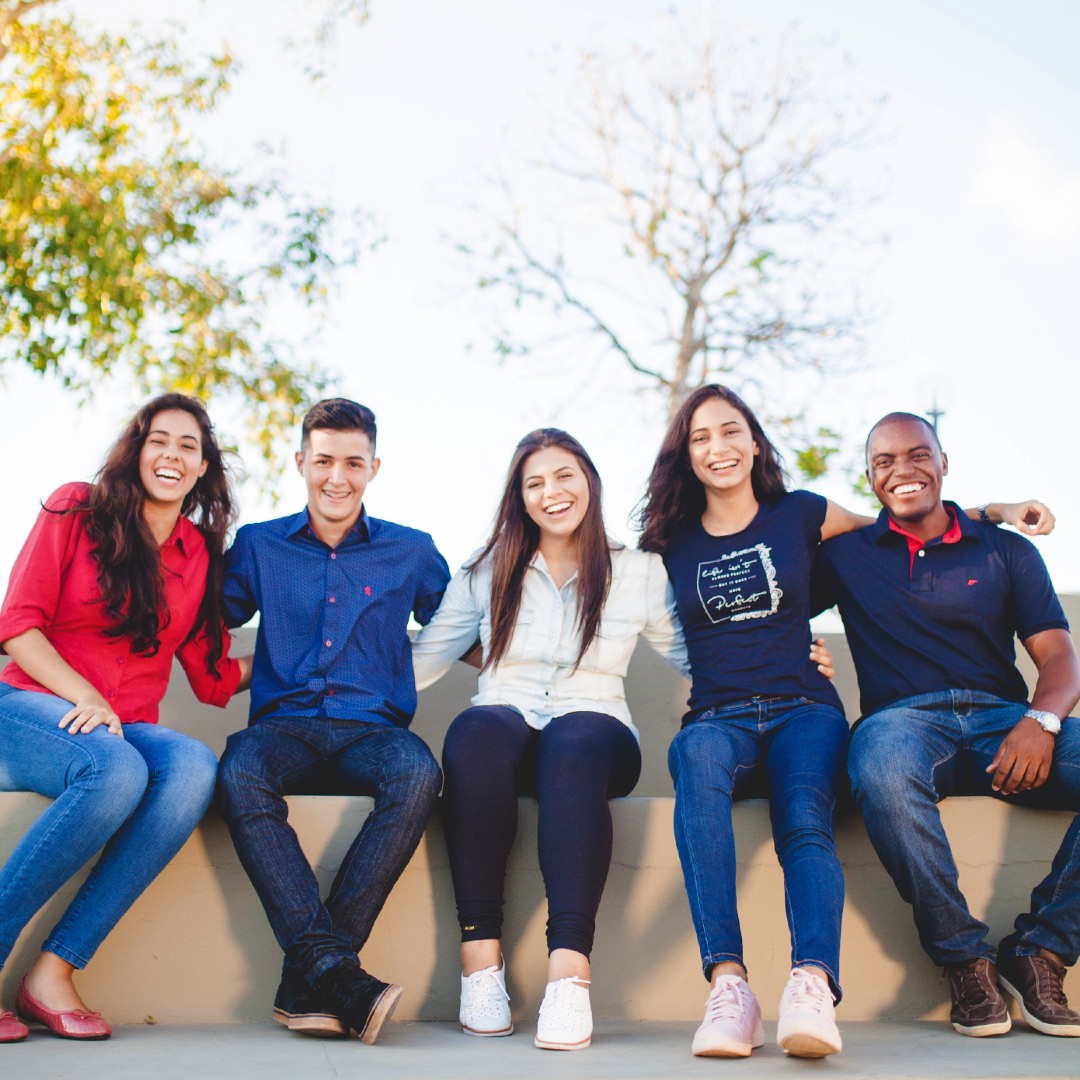 Extremes people have gone to do something uplifting for others.

How positive life endeavours can triumph through dark times.

How the Timber got to Glenties

This is a story my dad tells of what my grandad got up to during the Second World War. Living in Donegal in the 1940s was a serious time and meant heavy restriction were in place. There were travel restrictions, fuel restrictions, trade restrictions and food restrictions, all subjected to formal rationing that required the use of ration books. These were times when women wore long skirts to hide their stash, not their modesty. Bags of sugar were smuggled across the border by women who customs men were not brave enough to search.

Grandad was the chemist in Glenties. He also owned the hotel there, and the petrol pumps in front of the hotel. As the chemist in the town, he was also the primary medic, and if there was an accident or a plane down, he was the first responder. All of this meant he had access to a higher ration of fuel than most. It was a great responsibility during those serious times and as it is told, it seems grandad and his cronies took ‘having the craic’ very seriously too.

Here is my dad’s account of my grandad’s personal mission to help build the town’s very first public dance hall:

In 1941 or 42, there was a Greek cargo ship carrying timber from Canada that got torpedoed off the coast of Donegal by a German U-boat. Word got out and the Arranmore Islanders went out and salvaged the timber. Now, under maritime law, salvage was supposed to be given over to the state, but grandad, amongst others, decided he needed that timber.

So one night, grandad went down in an old model-T truck, in the middle of the night, with no lights on it (due to potential air raids with a war overhead), to Burtonport to pick up the timber and bring it back to Glenties. That road is lethal now and was doubly lethal then.

Fuelled on the return journey by their own homebrew, they managed to get themselves, the truck, and the timber back to Glenties without coming to harm. The timber was put to good use, fitting the floors and joists of the roof on the St Dominic’s Hall – the first public dance hall in Glenties!

So that is how the timber got to Glenties for the first dance hall, which was completed while the war was still on. On 5 May 1945, the day the war ended, my dad was born. All the more reason why he loves this story, as he was born out of true vigilante spirit. 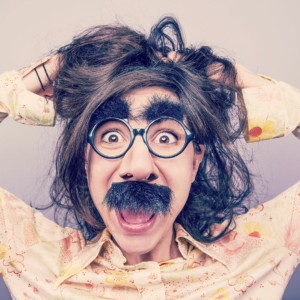 You couldn’t write it, stories of life that you couldn’t make up and cause you to laugh out loud.

The 9th of June, 1990 – the day of my wedding. This was back in the day where no one had a fake tan or got someone to do their makeup. So there I was with my pasty skin, covered in freckles and my bright blue eyeshadow, wearing the biggest dress you could imagine. I looked like a cross between a giant meringue and a reject from an Abba tribute band.

When I got to the church there was a huge crowd of people. My mother had invited a whole congregation of Irish cousins, most of whom we’d never met before. It was also my husband Andy’s birthday so I walked up the aisle to the vicar singing happy birthday to Andy.

After the ceremony, we headed to the reception but when we arrived there we noticed the cousins were missing. This was in the days before mobile phones but eventually, a call came through on the landline. The cousins had followed the wrong white car and ended up in Birmingham which was around an hour and a half away from the reception!

Our wedding was quite low budget so our DJ was really a dustman and was doing the music as a nixer. We told him we wanted Endless Love as our first dance but as we were invited to take the floor the dulcet tones of Engelbert Humperdinck singing Please Release Me serenaded us. We didn’t know whether to laugh or cry at this point.

The rest of the wedding went without any memorable events until we got to our hotel. We were in the bridal suite of a very fancy hotel that boasted a jacuzzi in the bathroom. I was very excited to try it out only I didn’t realise that the drain cover was missing and my backside got sucked into the hole! Andy, my husband of a few hours, had to drag me off it and I had a bruise for weeks.

So that was my wedding, surely a day we’ll never forget!

Our book has already been featured in the press & online!

Listen to our interview on Ocean FM

This site uses cookies. By continuing to browse the site, you are agreeing to our use of cookies.

We may request cookies to be set on your device. We use cookies to let us know when you visit our websites, how you interact with us, to enrich your user experience, and to customize your relationship with our website.

Click on the different category headings to find out more. You can also change some of your preferences. Note that blocking some types of cookies may impact your experience on our websites and the services we are able to offer.

These cookies are strictly necessary to provide you with services available through our website and to use some of its features.

Because these cookies are strictly necessary to deliver the website, refuseing them will have impact how our site functions. You always can block or delete cookies by changing your browser settings and force blocking all cookies on this website. But this will always prompt you to accept/refuse cookies when revisiting our site.

We fully respect if you want to refuse cookies but to avoid asking you again and again kindly allow us to store a cookie for that. You are free to opt out any time or opt in for other cookies to get a better experience. If you refuse cookies we will remove all set cookies in our domain.

We provide you with a list of stored cookies on your computer in our domain so you can check what we stored. Due to security reasons we are not able to show or modify cookies from other domains. You can check these in your browser security settings.

We also use different external services like Google Webfonts, Google Maps, and external Video providers. Since these providers may collect personal data like your IP address we allow you to block them here. Please be aware that this might heavily reduce the functionality and appearance of our site. Changes will take effect once you reload the page.